In the spirit of Halloween, do you remember Woody Harrelson’s character in ‘Zombieland’ (one of our favorite zombie films of all time!)?  The fact that he is in the midst of Armageddon did not deter his quest for a very common and well-known snack – the Twinkie!

This came up during a conversation with my husband when we were both savoring the scent of a chicken treat for our dogs (which by the way, if you have never smelled it before, is surprisingly heavenly!).  He commented that if he was ever desperate for food (as in the scenario of a zombie attack) he would absolutely, without hesitation, eat it.  As for me, I said I would hoard them, and then ration them out.  That is how good they smell!

In return, I asked him what would be that ‘one’ snack that he would quest for.  He paused and thought about it for a quite a while, and said Snickers.  Then he said Slim Jim Beef and Cheese Sticks.  As he tossed out different snacks, the ‘one’ snack became a list, which went on and on.

Then he asked me what would the one snack be for me.  After much thinking, I still cannot decide on ‘the one’ snack.  This is a REALLY tough decision!

Do you have that ONE particular snack that you would quest for?  What is it???  We want to know! 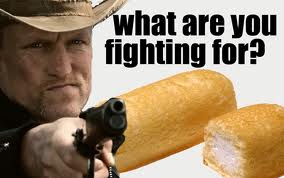 What is the one snack you would quest for? Tell us here!