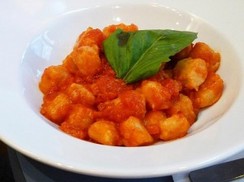 Gnocchi
It has never occurred to me until recently how pervasive potatoes are in our diet, especially in the snack foods category.

Let’s not forget baked potatoes, mashed potatoes, pierogies, gnocchi, potato pancakes, potato latkes, and knishes.  Then, of course, there are potato chips with lots and lots of varieties and flavors.

There are also other dishes with potatoes hidden in them.  One of my husband’s fantastic and incredibly delectable dishes, which can be somewhat complicated to make, is the shepherd’s pie.  I never knew until he started making it that the dish consists of more than a few mashed potatoes.

In Asian countries, you can also find potatoes in their dishes.  One of my dad’s popular dishes involves thinly sliced potatoes stir-fried with pork strips, scallions and garlic.

Also, more often than not, Asians substitute other plant roots in place of potatoes for an equally great starchy taste.  Some that quickly come to mind are taro, parsnip, and yam (sweet potato).   In many instances, I prefer the yam, although they are more often found in desserts rather than side dishes, entrees, or appetizers.

These starches are not only economical, they are also tasty, filling, and nutritious.  Most importantly, they are highly versatile and compliment any meal.

Hail to the starches!

What are your favorite potato snack foods and dishes? Discuss them here!